What's He Building in There? 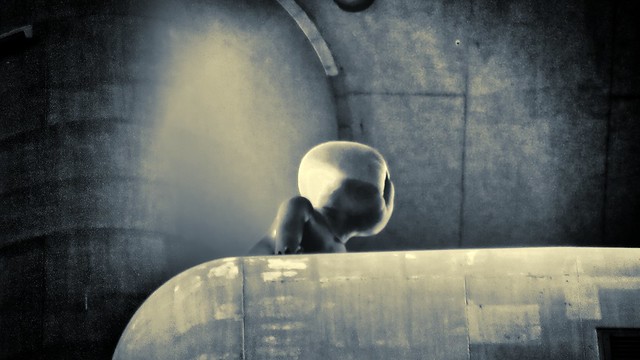 It's the first day of the quarantine in the Czech Republic and, following an irritable morning where I attempt to settle into this new routine and figure out what I can best be working on, I go downstairs to the cold, probably damp basement in a forgotten corner of the building I work in. What am I working on? That will be clear in time, but I have been doing this for some years now and must now start bringing it to a conclusion. This will be the first issue of a Creative Commons journal called variously Automat Svět or Marginálie. This has meant various things to me over the last three years when it has been coming together after the disruptions to the political system which occurred, or rather resolved themselves, in the second half of 2016. It is reasonable to state that a vanishingly small minority of the population of this planet have yet absorbed these changes and what they mean. We may soon discover how remiss we have been in neglecting to process them in time.

It is probably over a year ago now that I recorded a video about the first issue of Marginálie. I said it would be about neurodiversity. I have changed my mind about that since though, if I were to broaden the theme to mental health, even to health in general1, it is as topical and important now as it has ever been.

Quarantine, and the various restrictions we will all now face in Europe and elsewhere over the coming year, is going to test us all. We will discover the degree to which we have been looking after ourselves, the degree to which we have been looking after one another, the degree to which we have looked after the communities and systems which look after us, and the degree to which we are equipped, "empowered", and able to do any of this when the infrastructure we typically rely upon is more or less shut down for the long haul. We are not invariably in this time going to like what we find either about ourselves or the world around us. At least, it could be said, we will notice it all more than we have over the past couple of decades, but I am far from certain of that: many of us will fall back on the same crack cocaine-like habits of perseverating on the internet that we have had when much of the above was falling apart around us.

All of us can do this badly or we can do this well. We will see people in our circles struggling with finances, health, anxiety, loneliness, overload. We will have to help as well as we can.

I was not in good shape when this project began some years ago. I had been sacked from a job here in Prague. In the years up to this point, I had never found a role that worked for me. I was not well. I have what we now call ADHD and Asperger's syndrome.2 I do not consider these conditions to be civilisational illnesses as we otherwise understand them, but their progress is certainly significantly impacted by nutrition and, much more than their intrinsic nature in the individuals concerned, by the reaction of communities, societies, businesses, and institutions to people who do not fit into the ever-narrowing SQL-friendly3 defaults. I have worked hard on myself, to try to improve my condition, but the degree to which I was "functional" over this period was affected by the restricted roles on offer to me and the kinds of life I was able to live much more than it was determined by my skills and temperament. The way we progress through life has increasingly, from the time I was born in the stilll-industrial British West Midlands 1978, resembled a loaded game of snakes and ladders: some people tend to get more of the ladders, and some people get more of the snakes. Meritocracy is a loaded term, seldom reflected upon, but the notion that deserving people get more ladders, and undeserving people get more of the snakes, seems to me, as it does to many, an abominable nonsense supported by none of the facts; that the people who have had a good run of ladders do not see this is surely unsurprising since it is comforting to believe that we deserve the good things and the freedoms we have attained. In twenty years of trying my hardest to survive and find a role for myself in Britain and the Czech Republic, I had not come across more snakes than most, and I had had a few ladders, but the reality of my life has been that as time wore on I only accrued more in the way of psychological burdens (in addition, that is to the symptoms of the conditions I have mentioned) which often prevented me from playing the latest insufficiently suitable role that I had stumbled upon. I did not love myself, certainly, and though it feels gauche and vague to remark upon this, it is as accurate as it would be to say that I had internalised the notion of my being on the one hand defective, and on the other hand, a loser. These notions, I would argue, are a much more significant part of the collective consciousness than they ought to be, helping good citizens to sort the wheat from the chaff as they build mental maps of the world they live in and the people around them. In Dickens' day we arguably witnessed in certain demographics at least more willingness to question the allocation of people into categories such as the deserving and undeserving poor. In Britain at this time, around six years ago now, we had rapidly got to the point where anybody who was unemployed4 or disabled was thought to be a parasite and met with hostility by institutions and fellow-citiens alike. This at a time where all political parties had abandoned full employment even as a notional goal and inequality had rapidly increased as a function of the only game in town: neoliberalism.

I had few friends. My closest friend in Prague, who was also autistic, had been sacked, when he was ill. Working in a school, I could see how people who did not fit the defaults were excluded early, in preparation for a life of people excluded later on. Though I had questions about how the school operated, I knew too that the great is the enemy of the good and it was clear that "the system" that ensured these outcomes, was much larger than the school itself. I knew this in part from my experience of working for something like the minimum wage as a support worker for such forgotten and excluded young adults. I saw that, though I had only been diagnosed by now for a handful of years (the struggle to be diagnosed began before my thirtieth birthday and ended a few years after it), I would myself continue to fail to fit into the defaults for which businesses and bureaucracies optimised. The best it seemed I could expect, if I were not to succeed in making a name for myself in one of the disciplines I had long believed myself to be more or less made for, was to carry on moving from one job to another, learning them at length, conditioning myself to the environment, and pretending to be "normal" for the time I could cope.

I was not coping, of course. For years I had been on my own, a part of none of the communities I had moved among and through. I was never fully accepted. I never fully belonged. And yet I thought myself defective. Certainly, the bundle of hurts and disappointments I had experienced had led me to believe that I did not deserve love and ought not to count on it. I threw myself into culture more than ever, and lived a reclusive life. I was angry and bitter, fearful of the future, anxious, hopeless, and lonely; I was also at odds with almost everybody with whom I might spend my time, a broadly gentrifying crowd who had what was to me a naive and privileged notion of life. When I was let go from this job some months after I earned praise from the inspectors, I resolved to not pretend any more, to not give of myself to things I did not believe in, to not pretend to be somebody I was not, and to work towards something I could be authentically, something I could imagine being content with and for which I alone might be responsible. As well as being the only sustainable path for my own mental health, this seemed to be the only pragmatic step: nobody else looked likely to look out for my welfare. My father had had his own business. My uncle, who had recently passed away, had done the same. This, broadly, is the course I took.

I am fearful now that this pandemic and everything it will mean for us in the coming months, and everything it will mean subsequently, will disrupt my routines and test our societies and degraded, neglected, disrupted, and sabotaged5 political apparatus. But I am, intermittently, provisionally, with many caveats and qualifications, hopeful, that I might finally begin to explain something of myself, that I might find a voice, and that voice, though it does not speak for everybody (it could do so only in a world I would not wish to live in, and I do not respect anybody who wishes to speak for everybody as if there is only one creditably reasonable or "enlightened" voice) might mean something for others who had been endlessly ventriloquised for without ever finding a place for themselves: those many others, that is, whose lives have been struggles to survive whether or not they may be surrounded by material things.

This first issue will for the most part deal with the changes our societies have witnessed not only over the course of my lifetime. It is something I have given more thought than all but a vanishingly small fraction of one per cent of the populations of any of the countries which have been thought to matter. Since all of the people who have had a run of ladders long ago pulled them up after themselves, I consider that important. Here and there we will also see my own struggles to see myself as having value, and to see the work I do as having value. I know I am not alone in any of this and for that reason, though some of this will make for neither easy nor comforting reading (listening, and viewing), I have the hope that it will reach people who need reaching and that they will thereby find the comfort of recognition and of being finally understood. There will be those who find a voice here even before I get to the point of accepting submissions. Remember that, those of you who are inclined to beat down those voices you do not consider convenient, before you weigh in with your invective. This is not for everybody - not for a long way - but we have built societies around the greatest good of the smallest number, and as we watch how that looks in the grip of a pandemic, it might be wise even for those with the ladders to reflect upon how unstable and dangerous that is.

This is issue one of Automat Svět. Make of it what you will. For good or ill, I am committed to making of it what I can.